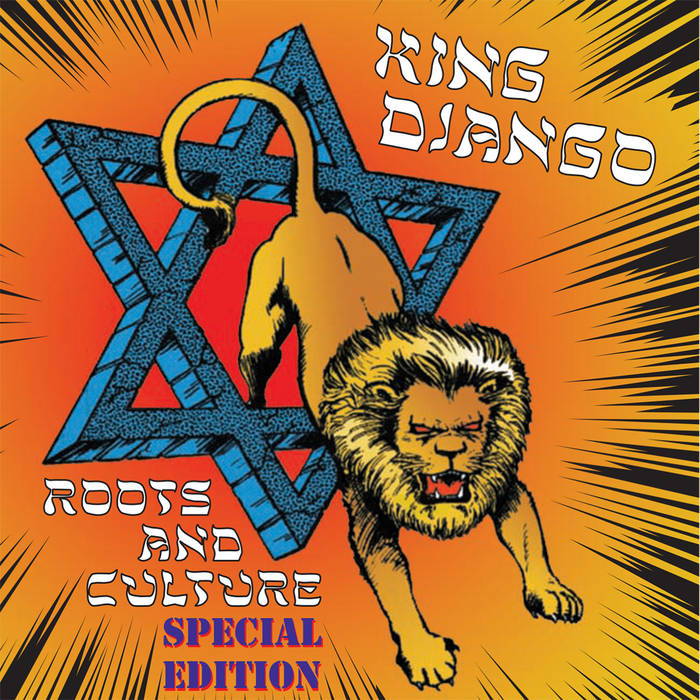 The legendary King Django has remixed, remastered, and added to his classic Roots and Culture album - the definitive mixture of authentic Jamaican ska and reggae with Jewish culture and music.

Traditional Jamaican ska and reggae with a twist: mad Yiddish flavor in the mix!?

King Django, known as one of America's premier reggae and ska artists, now introduces his most unique and vivid assemblage yet. Travelling the halls of both his beloved Jamaican vibration and Jewish heritage, King Django's Roots & Culture Band pairs musical and blood families in a titillating twist of traditional Hebrew folk, klezmer, reggae and ska with a Brooklyn bend.
Klezmer music evolved from Eastern European and Greek music, improvised largely by travelling Yiddish musicians. In the late 1800's, the sound accompanied Jewish immigrants to America, where it incorporatated jazz and Dixieland stylings into its form, ultimately becoming a festive music where ritual and revelry joined hands.
Ska, the "grandfather of reggae" is also a well-traveled music. Birthed in 1960's Jamaica, it moved to England where it mated with punk and finally emigrated to America, where its blues and swing styles originated. Likewise, both ska and Klezmer are filled with tradition. As Django notes, "It always seemed apparent to me that there were a lot of similarities between the musics, particularly in terms of the offbeat feel."
On his 1998 Roots and Culture album, Django continued the upbeat mishmash celebration with his talented true friends and family. Members from his class acts Skinnerbox and The Stubborn All-Stars, as well as community cronies from The Toasters, The Slackers, and The New York Ska Jazz Ensemble lay down the traditional ska through which luminaries like Klezmer mandolin/clarinet player Andy Statman and The Klezmatics own violinist Alicia Svigals resonate the sound of ancient and modern-day Jewish music.
One track even finds the Baker family - mom, dad, aunt, uncle, brother and a friend - singing the chorus. "One of the first things I can remember, of my whole life, is my grandmother singing Yiddish lullabies to me," Django recalls. "I really wrote this record for my family."
Yiddish scholar, songwriter and performer Michael Wex was brought in to help pass kosher poetry to the Yiddish lyrics, textually underscoring Django's symphonic efforts to take the rhythm of Jamaican music and join it with tonalities and harmonics of Klezmer. The result is a lilting and seductive combination of ancestral ditties mixed with a straight-up reggae, traditional and two-tone ska. Covers of "Madness", "Nightboat to Cairo" and the special "Do Nothing" (both sung in Yiddish) carry the shared passion and panache of two rich heritages into an utterly righteous and completely catchy realm that must be heard to be understood.

After the release of Roots & Cuture, the idea of taking this material to the stage started to brew. Ben Herson and Jon Natchez, both formerly of Boston ska-jazz sensation "Skavoovie & The Epitones" had expressed their interest as had Django's long-time musical cohort Noah Shachtman, but things didn't really come together until Django began to frequent Klezkamp, the annual Yiddish Folk Arts program There, he was bedazzled by the talents of Alex Kontorovich, Benjamin Holmes and Adrian Banner, all members of Princeton, New Jersey's Klez Dispensers.
It was also at Klezkamp that Django first met Klezmatics trumpeter and leading Jewish musician Frank London, who really provided the igniting spark; after hearing the 1998 studio album, Frank suggested that Django needed to get a band together to play this material live.
The Roots & Culture band played its first show at the Workmen's Circle Purim Party in New York City in February of 2002, opening for the Klezmatics. A seminal force in the East Coast scene, KING DJANGO has made his name as a singer, ragamuffin MC, songwriter, arranger, instrumentalist (trombone, ukulele, harmonica, melodica, etc.), producer, studio engineer and label owner (Stubborn Records). His recording and touring credits include Stubborn All-Stars, Skinnerbox, Rancid, The Toasters, The Slackers and Murphy's Law. He always keeps busy and always has a surprise or two up his sleeve.

Drawing on diverse influences such as dancehall, ska, roots reggae, rock, soul, swing, and American and Yiddish folk music, King Django is definitely a hard man to pigeonhole. His versatility within genres of Jamaican grooves, punk and rhythm & blues is unmatched, starting early as the singer and trombonist of legendary NYC ska band The Boilers (1986-1988), evolving through reggae/soul/punk/jazz experimentalists Skinnerbox (1989-1998), and achieving mainstream recognition as the leader of traditional ska supergroup Stubborn All-Stars (1994-1998). After the ska revival died down, King Django was able to devote his full energy to solo material: Roots and Culture (Triple Crown Records, 1998) combined ska, reggae and traditional klezmer music; while Reason (Hellcat/Epitaph, 2001) was an adventurous, eclectic, self-produced rock album deeply grounded in roots reggae, dancehall, hip-hop, and drum and bass.

King Django has toured internationally many times over as a solo artist and also as the leader of Skinnerbox and Stubborn All Stars and as trombonist for Rancid, The Toasters, and legendary New York City hardcore band Murphy's Law. In the studio, he has worked closely with fellow NYC pals the Skadanks and The Slackers. He recorded with Tim Armstrong, Lars Fredrickson and Matt Freeman of Rancid and Dicky Barrett of the Mighty Mighty Bosstones on Stubborn All Stars¹ Back with A New Batch in 1997 (Triple Crown). At about the same time, Django began collecting studio equipment and soon the legendary Version City was born. Within months, a steady flow of bands flocked to this NY mecca to create warm Jamaican vibes with Django¹s knowledge, production and engineering skills. Over the years, several "Version City" multi-artist collections have been released worldwide showcasing this unique clique that became the heartbeat of East Coast ska/reggae music. The latest of these is Version City Rockers’ Darker Roots (Antifaz Records, Puerto Rico) which features veteran Jamaican artists such as Sugar Minott, Yabby You and the Prophets, Sister Nancy, Ranking Joe and Cedric Brooks.

At present, Django spends a lot of time in his relocated Version City recording studio, now in New Brunswick, NJ. He also performs regularly with his King Django Band, King Django's Roots and Culture Band, and as a “selector” (DJ) and “DJ” (MC) with his Version City Sound System, among others.

"If you've spent more than a minute on the ska scene, you'll know that [he's] the original New York rudy...who kept the flame burning even when it was just a candle in the window." - - Alternative Press

KING DJANGO'S ROOTS & CULTURE BAND
The Roots & Culture band is a traditional ska and reggae band, but with a twist: mad Yiddish flavor in the mix. Klezmatics trumpeter Frank London really provided the impetus for this band's formation. After hearing Django's 1998 Yiddish reggae album "Roots & Culture," Frank suggested that Django get a band together to play the material live. The Roots & Culture band played its first show at the Workmen's Circle Purim Party in New York City in February of 2002, opening for the Klezmatics. With a tight rhythm section and blazing 4-piece horns, kicking new tunes in the Yiddish ska vein and lots of chestnuts from Django's Stubborn All-Stars and Skinnerbox days, Roots & Culture is a party and a half.

King Django says:
Roots & Culture was my first recording project as an engineer. The rhythm section had been expecting to report to a certain studio in midtown. The night before the session, I called everyone and told them to come to my East Village rehearsal space instead. They all wondered if everything was alright but I gave them my assurances.
When they arrived at the rehearsal space the next afternoon I was covered in dust and sweat. I had been there since early in the morning cobbling together the newly-acquired pieces of what was to become the original Version City studio. As I connected and checked and assessed things my friend Taggio ran to and from the music store bringing back this part and that cable and these plugs. The musicians thought I had completely lost my mind. I sent them out for lunch and when they were done we were actually ready to start getting sounds and begin recording. I remember being amazed that everything actually worked the way I thought it did.
We recorded to an 8-track ½” reel-to-reel tape machine with a very small selection of very inexpensive microphones. I later mixed the rhythm tracks down to stereo (2-track) sub-mixes to give myself an additional 6 tracks for overdubbing horns, percussion and vocals. This became the standard modus operandi at Version City for the duration of the NYC location.
Over the years as my ears and studio technique developed I started to hear the album in a different light— even given the limitations of my original recordings I knew I could make it sound better. When the CD sold out again in early 2006 I seized the opportunity. I dumped the original 8-track rhythm section recordings into my digital setup and then dumped in and synchronized all the overdubs. This gave me a degree of control that was simply unavailable to me at the time of the original mixdowns.
I now present to you the result: what I hope is a cleaner, fuller, warmer, brighter version of this album for your enhanced listening pleasure. Lekhayim!

Yiddish editing and Yiddish versions and translations of Do Nothing and Night Boat to Cairo by Michael Wex.

Lion and Star logo by Dr. Revolt ◊ Design and Layout by Duggybones